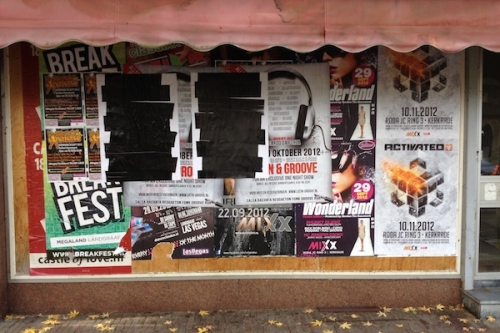 Reality Tracks, a project in three parts, invites various artists to work on new projects in the projectspace in Hoensbroek. Whereby the direct environment is a leading reference. How will the urbanistic area and the cultural vacuum of Hoensbroek influence the works of these artists? Each part will be concluded with a presentation and artist talk whereby the results will be shown to the public.

– Joris Perdieus (°Genk, Belgium 1981) is an installation-artist who drew inspiration from big-city live (Brussels), literature and theatre. His scenografic installations often find themselves stuck between the theatricality of Opera decors and the playfulness of artists the likes of the late Jason Rhoades. Joris constructs, quite literally, objects from wood, polyethylene and paint and injects them with drama by using coloured lighting and theatrical settings. The results are empty sceneries, in which the spectators become characters. During the period of residence at Greylight Projects Joris Perdieus will work on the production of a new installation that will afterwards be on show in the Brussels based B-gallery. The work’s starting point is a personal reflection on the artist’s relationship to his hometown Brussels. Although the idea has been more or less shaped before the start of the working period, the installation is bound to finds it’s true appearance during its production, in which the Greylight atmosphere will have an important role to play.

– Matthieu Levet is a musician and sound artist based in Brussels.
Under his solo moniker Carrageenan, he released two albums and performed in France, Belgium, Germany and China. He’s also a member of the noise duo Vermisst Susi. His visual and installation work has been presented at Naked State Gallery, Brussels (2011), La Générale, Paris (2010) and Inknight 64, Paris (2008). He was graduated of the Ecole Nationale des Arts Décoratifs in Paris in 2005.

– Suus Touw is working in a formal abstract style. His posture is characterized by concentration and commitment in order to control the medium and to disregard it at the same time. He considers himself as a researcher working within a self imposed framework. Art for the people of Hoensbroek (with out them knowing it). The project of Suus Touw wil consist of hand made posters of strokes of black ink on white sheets of paper. Each poster wil be an exact copy of the original image. These posters wil be spread in the town of Hoensbroek, by doing so the image wil subconsciously nestlle in the minds of the inhabitants.

Reality Tracks is a collaboration with (h)ear Experimental Audio Research