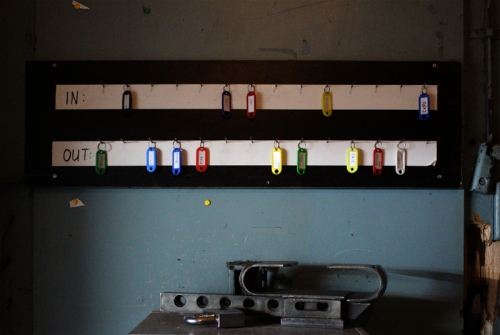 We welcome you to the opening of the exhibition IN / OUT. An exhibition initiated by Septembre Tiberghien after her residency at Greylight Projects Brussels last months. Questioning the material and immaterial relationship between artists, curator and their environment. She considered the self-sufficient economy of the artist run-space as the starting point of her exploration. Instead of investigating a specific space, she invested specific time for meeting the residents. The result is a evolutive show that will take into account the dynamics of the participating artists in the building.

“There must be something between cynicism and sarcasm, …

– Unknown author from the XXI Century

This exhibition attempts to materialize not only one but several forms of disruption into a space characterized neither by its religious history and heterogeneous architecture nor by the fact that it contains traces of works that are mostly invisible. Taking the risk of a non-sense, I choose to reveal instead of burying those abstract and unpredictable movements reflecting the vivid activity of the artist studio and what’s happening between the inside and outside of his/her brain.

My personal interest in artistic process, also called « poïétique » comes from the quiet and repetitive observation of artists in the past years. As an art critic I like to understand the intentions behind a gesture or a concept but I also like when an artwork resists at the first gaze. When I first came up in Greylight projects for this residency, my objective was to pay attention to all the little details that one doesn’t notice necessary in the life of a working space and its cohabitants. The way people circulate in the building for instance, what kind of relationship is develop between each others, etc… I choose not to impose directions but on the contrary to make myself available one day a week for anybody who wants to have a talk. To be honest, this approach didn’t work so well. One of the reasons could be that I was so focused on the becoming dialogue that I forgot the purpose of my own research.

As a matter of consequence, for this exhibition I have tried to shift perspective and I decided to play the role of a director, selecting only the frame (trolley) and the artworks, to give artists the opportunity to express themselves by moving their bodies and works in the space. So they become actors as well as viewers. In doing so, my wish is to facilitate the emergence of a poetic experience.