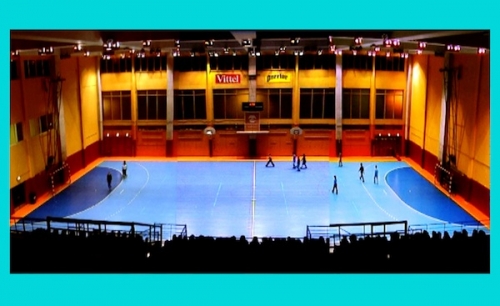 Thomas Bernardet is a french visual artist curently living and working in Brussels. Using notes, videos, photographies, sketches Bernardet extract details (such as a sentence, an object…) from our everyday reality to turn them into “working documents”. During this one-evening presentation in Greylight Projects Brussels, Thomas Bernardet will show three films focusing on the idea of shooting, documenting and recording live-artworks of other artists.

Trois Quarts Temps, An attempt at describing a site-specific project. Video, color, sound, 2010, 60 mn.
A video document on a piece by choreographer Laurent Pichaud.
Three Quarter Time is a film about a choreography by Laurent Pichaud, “référentiel bondissant, pièce pour gymnase et gradins”, which is a work-specific site designed to be performed in type C gymnasiums. It attempts to document this work and its relationship to the places where it is performed, through three recordings made in three different gyms.

Documentation en cours. Video, B&W, sound, 1999, 12 mn.
A video document on a piece by choreographers Emmanuelle Huynh and Christian Rizzo.
A psycho-geographical collage, filmed and edited on the fly, documenting a lecture/performance by dancers  Emmanuelle Huynh and Christian Rizzo. Emmanuelle discusses the working relationship between M. Cunningham and J. Cage and her own practice. She was then a resident of the Domaine de Kerguéhennec contemporary art center, where she was working on her next piece, “Distribution en cours”, with a score by Christian Marclay.

Looks like High School Drama, Video, color, sound, 2009, 13 mn.
A video document on a play written and directed by Stéphane Arcas.
The video camera records the image of the empty stage just after the first presentation of Stéphane Arcas’s play ” La Forêt”. The action on stage is over stage, the sounds we hear are from the after-show party given in the lobby. The title of the piece is inspired by Stéphane Arcas’ response to the film.