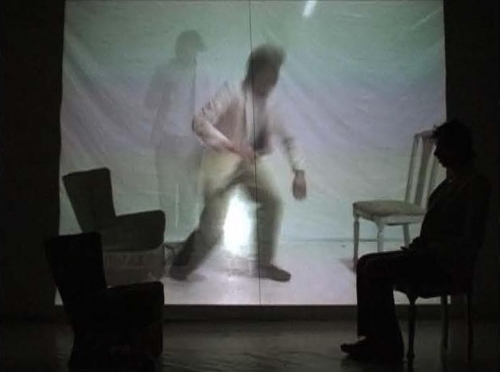 Les Alices is a theatrical proposal questioning the boundaries between the world and its perception. This project is a collective creation of François Kah, Maria Harfouche and Stefan Piat.

We start from a simple position, a lounge, two people living through small daily events. Tea, chess, mirror, clothing… Apparently, nothing happens, or nothing more than a mechanical set of daily rituals. From this frozen frame the scene slips subtly into the interiority of the characters, into their own perceptions. The boundaries between reality and fantasy fade away. Then occurs a confusion between these two poles, between action and thought to no longer distinguish one from the other. We want to play with viewer’s perception, losing him somehow. To show a recognizable world while we subtly shake the rules. Changing the relationship of things among themselves to bring out the unusual and disrupt our relationship to reality. Our research emphasizes a theater of images. Through the interaction between actor, video and sound we want to give you to feel rather than to tell you a story.

The creation process of this piece can be compared to the establishment of a puzzle. We had explore materials as diverses as Gilles Deleuze’s research on sens and nonsens, writings of Lewis Caroll (and more widely the english literature), Anzieu’s work on psychanalysm, paintings of Magritte and Aloise Corbaz, Raymond Depardon’s film San Clemente about madness, video art of Bill Viola, Peter Campu’s and Dan Graham’s closed-circuit video installations. Gathered around common questions, each of us brings his own propositions in the form of texts, images, acting situations and scenics proposals. From this step follows an exploration of these materials. We focus on an instinctive approach of the creation process. Even if our startings points are theoreticals, our research is located on stage more than on table.

Working on a theater of images, we’ll focus on video and sound as a tools to disrupt space and time, to generate imaginary visions. Experimenting on the screen surface (projections on objects for example), recording video and sound direct from the stage to replay it live with delay, loops, pre-recorded sounds and images..